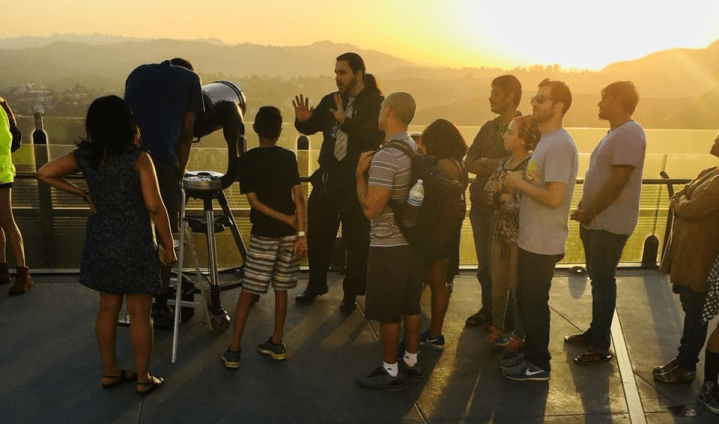 That’s me in the middle.

As a telescope demonstrator, you’re bound to get asked the same questions over and over. Some are thoughtful and I’m happy to answer, while others can get old really fast.

Let’s Start With Questions That Deserve One Word Answers:

Do you think the moon landings were faked? No
Can you see the American Flag? No
Do you or anyone at the observatory think the Earth is flat? No
Do you think aliens exist? Yes
I know you’re closed, but can you please let me in line? No
Do you believe in astrology and horoscopes? No
Is viewing free? Yes
Can’t your telescope shine though clouds? No

Most who ask this question are just asking for the sake of asking, and aren’t necessarily interested in getting one themselves.

Most of the time, when it comes to the 11″ SCT’s, people who ask that question imagined the price of them to be much higher than they actually are.

Is There Some Special Event Going On?

On a normal day, we set up and offer free public viewing every night the sky is “clear” enough.

Ironically, it seems visitors are more aware of the once a month star party hosted by Los Angeles Astronomical Society that gets held on the front lawn, so on a normal day when LAAS isn’t present, they are surprised by us setting up.

I’ve Been Here Many Times, Why Is It That This is The First Time I’ve Seen You Set Up?

Usually it’s because you have visited on a cloudy night, or you usually leave in the day time before we start setting up.

I usually start setting up outside after 6 pm, and I often see a huge wave of people leave the observatory before the Sun goes down.

Who or What Determines The Object You Point To?

I as the operator get full reign with the telescope I’m assigned to for the evening, and I can pretty much point it to wherever I want. Sometimes I’ll coordinate with my fellow operators on who views what, other times we just view what we want.

It depends on which celestial sights I know are visible during operation hours, the conditions of the sky, and what I feel will be the most interesting to the public. As people literally listen with their eyes, we try and find objects that would look the most interesting and inspiring to them. But of course, when we’re dealing with cloud cover, sometimes all I’m left with is the moon or a bright star, and if the clouds prove too thick, then all I can do is point to the city landmarks below.

Can You Point it To {Insert Different Objects Here}?

If it’s an object below the horizon or not visible due to light pollution, it’s a definite no!

If it is visible, while you being polite can determine if I do it or not, it ultimately goes down which telescope I’m operating… AND if I even want to view it.

Why Aren’t You Using the Metric System, Saying Distances in Parsecs, or Temperatures in Kelvin?

Yes, it’s commonly known that in the world of science and medicine, the metric system is used. I’m supposed to explain things in a language people can understand, and since 7/10 people who visit are Americans who don’t use metric, then as a habit I don’t use it.

Sometimes I’ll say things in “the science tongue” but if I don’t need to use it, then I won’t. Most who visit don’t know what parsecs or AU’s are, or what temperatures in Kelvin mean. Even if I say light years, many still need me to equate that in how far away the object is in miles.

Does the Light Pollution and Haze Affect How Well You Can See? 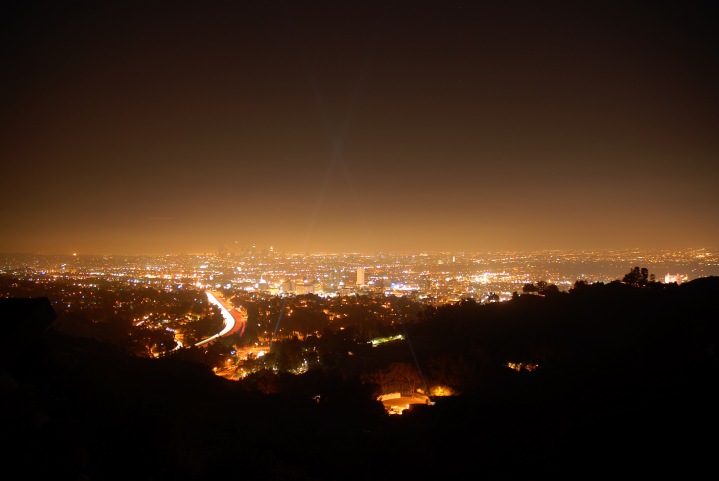 The skies above Los Angeles are very bright, and the lights severely affect our view of the stars. But if the object in question can shine through the light pollution, we can see the object just fine through the telescope. Bright stars and the solar system objects of course will look fine, but deep sky objects on the other hand are admittedly shells of their true selves with only a few bright enough to qualify as “impressive.”

What we deal with more than anything is the changing quality of the seeing conditions caused by the atmosphere and the levels of haze above Los Angeles. We can get good views as long as the air above is steady.

Has Los Angeles Always Been this Smoggy/Hazy?

Los Angeles is not as smoggy as legends say it is! I’ve worked plenty of days and nights where the view is super clear.

Scientific research, regulations, and efforts that were made starting in the 1970’s have gradually gotten the smog levels to the point where “smog alerts” are a thing of the past. While L.A. may still be the worst air polluted city in the U.S.A., but in the 500 worst air polluted cities in the world, L.A. isn’t even listed!

Believe it or not, the Los Angeles area has always been naturally hazy due to the inversion layers and onshore flows being blocked by the nearby high mountains. Spanish explorers sailing into San Pedro Bay in 1542 could see the smoke from native villages appear to flatten out from hitting an invisible ceiling. They were so impressed by the sight that they labeled the area “Baya de los Fumos,” or “Bay of the Smokes.”

Can You Shine Your Laser Again?

Rather than use my fingers, some of of us use bright green laser beams as tools to help point at objects in the sky. It’s fun to hear the initial reactions, but many times it becomes more about the laser than actually learning where stuff is in the sky.

There are many times where I’ll give small tour of the sky, showing where the planets are or where they can see familiar constellations. “Any questions?” “Yeah, can you show your laser again?”

The other follow up is usually, “how do you get one of those?!” But sorry, I won’t tell you how to get one. There’s too many cases of people pointing these lasers at aircraft and getting arrested.

Sure, I do get asked my share of good and interesting astronomy questions, but I always need to remember that most who come up are tourists who may be astronomy illiterate. As long as they are given the best experience possible for them, then I have done my job.