Being someone who works at Griffith Observatory, an iconic and historic landmark in Los Angeles, California, definitely adds some credibility to your passion and knowledge for the night sky!

For the most part, Griffith Observatory has served as a public outreach location for the residents of Los Angeles since it was built in 1935. As one of the most popular tourists and civic gathering places in the world, it has always been a place that served to inspire everyone to observe and understand the sky – much like what I’ve done for family and friends all my life.

I first visited the place as a young child in the early 1990s, and freaked out during one of the famed planetarium shows. Since I hated darkness and loud noises, as soon as the show made the room pitch black during a simulation of the night sky, as the Observatory Lecturer said over the microphone “are you ready to visit the galaxies?” when everyone in the audience roared “yes!” I cried out, “no!”

Over time, my knowledge of the cosmos grew, and thus the place became somewhat of a Mecca for me. Whether I visited alone, or brought someone else with me, it was always a special place for me that helped expand my knowledge or helped explain it to someone else.

In the Summer of 2017, I was in a “Redesign” phase of my life due to numerous setbacks that occurred during prior couple of years. One of which was my working situation, and literally a couple weeks after enjoying the Total Solar Eclipse from Wyoming, I was let go from working at Amazon after just a couple months being there.

The next day after the firing, I learned that a person I knew had suddenly passed away. This impacted me because while I felt like my life at the moment was in the gutter, I realized things could have been much worse. It was like a voice telling me “you may think your life sucks, but you still have your health. Your couple months at Amazon served its purpose, but it wasn’t your final destination!”

So with that thought, in my search for employment, I thought of looking up opportunities at Griffith Observatory because “what’s the worst that can happen, they say no?”

Sure enough, I saw that the position for Telescope Demonstrator was open, and upon looking up the requirements, I realized “hey, I’m very proficient with telescopes! I think I qualify!”

The cover letter and resume I submitted highlighted not only this website, but the things I have done with the Solar Eclipse, and the numerous events and presentations I have done for family and friends such as the nights in the Hopi Reservation and Joshua Tree National Park.

I didn’t hear back from Griffith for a couple of weeks. I almost forgot I submitted the application, and was also just entering employment at another day job that had better pay and better benefits than Amazon did. Then one day, the email popped up, “dear applicant, we reviewed your resume and would like to interview you!”

Of course I was shocked, and looked up to the ceiling and asked “is that you, God?”

For something like this, I had never been as nervous in my life as I was when driving to Los Angeles on my way to the interview. I played and coached in high caliber championship hockey games and still wasn’t as nervous as I was for this interview!

I won’t give any names away, but the two men who interviewed me were longtime staff with doctorates in their respective fields, which of course made me even more nervous because I was thinking “oh great, I’m just an amateur and I have to impress THESE guys?!”

First I was given a tour of the famous Zeiss Refracting Telescope – the very same telescope that was installed in 1935 that holds the record for most views by the public.  Once it hit me that if I was hired that I was eventually going to learn how to operate it, it definitely added more excitement!

I was told prior to arriving that part of the interview was going to be a written test, which could take up an hours worth of the interview. But after talking to me, it was already clear to the two interviewers that I possessed enough knowledge, and was told “nah, you don’t need to take the test.” “Well that’s a good sign!” I thought.

When we simulated myself presenting to the public, they definitely asked me the tough questions on purpose, and some of which did in fact stump me and/or were later corrected by the doctorates. One such question was “is there erosion on the Moon?” and my instant answer was “no” due to what I knew about plate tectonics and weather erosion happening on Earth but not our Moon. Then they corrected me by saying “while you’re technically right, there is in fact erosion, and it’s all caused by the constant impacts from asteroids and small rocks.”

Another question had to do with the color of stars, and when I knew they were indicators of temperature, I was asked “how can you show differences in star colors and temperatures?” “By showing them red stars like Betelgeuse and blue stars like Rigel,” I said. He continued, “But what if the person you showed Betelgeuse to has left and you probably won’t see him again? Aren’t there any locations where you can show them all at once?”

I drew a blank. First I said “perhaps star clusters and double stars.” “Is there one where there’s clearly a double star with two different colored stars?” Again I drew a blank because of my nerves. My mouth began mimicking Ralph Kramden in the Honeymooner’s episode with the failed TV commercial.

And then I mentally smacked myself in the head. “Oh yeah! The double star Albireo! I’m surprised I didn’t think of it because I’ve shown it countless times and even took a picture of it over the Summer!”

We all had a laugh as they could tell I was nervous, but reassured me “you’re doing fine.”

After the interview was over, I was told I’d know their decision within 7-10 days. I just felt honored enough to be interviewed, and while keenly showing my interest, I accepted the possibility that perhaps they may find a better candidate than I and choose that person instead.

The 7-10 days turned into 20. Once more I almost forgot that I had interviewed, and felt “okay, it’s not happening. It would have been nice but at least I could say I tried.”

And then the email came! “We’re happy to announce that we will recommend you to be hired as a Telescope Demonstrator for Griffith Observatory.” Again I was overjoyed and looked up, saying “is that you, God?”

Since everyone who works at Griffith Observatory are technically employees of the City of Los Angeles under the Parks and Recreation department, I had to go through a long process of getting a bunch of paperwork filled out (medical clearances, fingerprint scans, etc.). This of course took more time, but thankfully the wait period was not as nerve wrecking as before.

The time I started actually working my shifts at the Observatory could not have been timed better. Whereas the interview and hiring process took place during the “Redesign” phase of my life, my first official shift marked the beginning of the “Rebuild” phase.

The “Rebuild” phase for me is a time of sowing the correct seeds for something better in my life. Yes, my day job also has its purpose, but for me, being at Griffith means more avenues to open up while providing me something I love doing while getting paid! Just being around other people who share the same passions as I do about the night sky is a big plus, and everyone that I have talked to there has always offered a new fact or new perspectives!

You could not have asked for a better place for me to be. And it’s only going to get better from here! 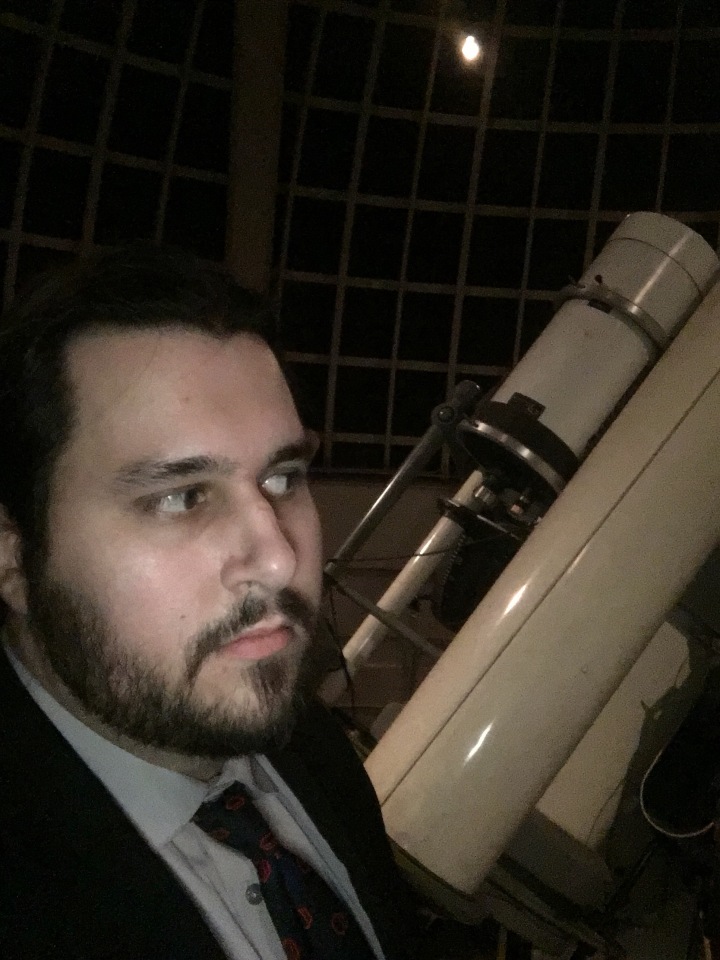 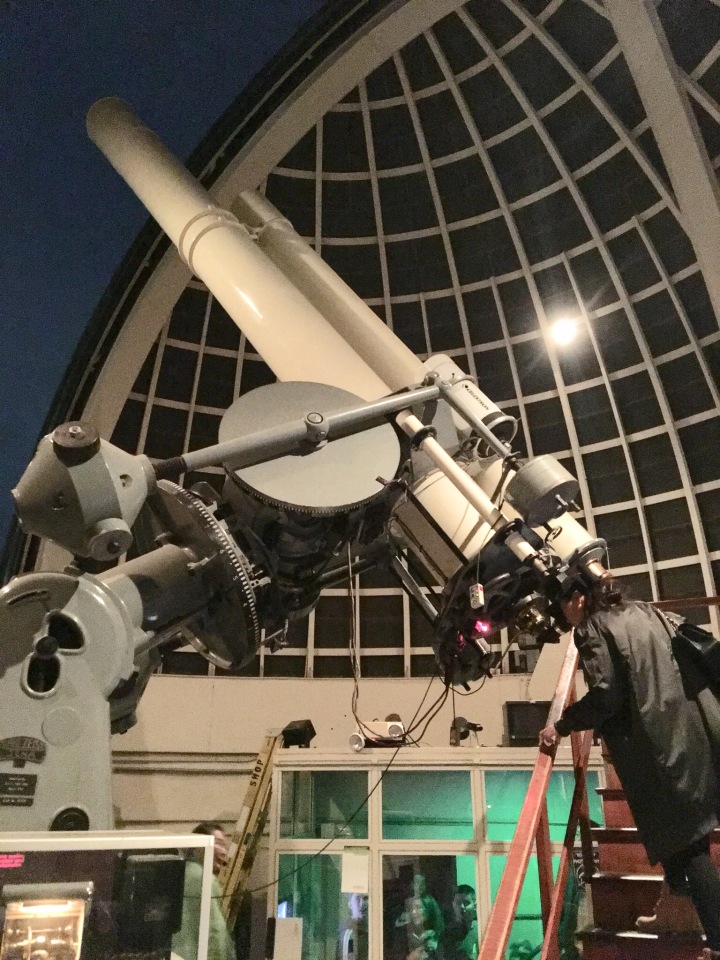