The autumn sky doesn’t have many stars we consider “bright” and the most notable star, Fomalhaut, is in a lesser known constellation towards the south, often being nicknamed “the Lonely Star of Autumn.” From a city, it doesn’t look like there is much to offer for Autumn, but don’t let the appearance fool you, there are still some gems!

One cool thing about the northern autumn sky is the constellations near each other represent characters in the story of Perseus from Greek mythology. 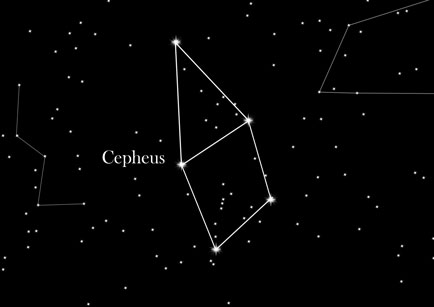 This is on the opposite side of the northern sky as Ursa Major, thus is low in the spring sky but high in the autumn sky. The shape of the constellation looks like a kindergartner drawing of a house. It is supposed to represent a man’s head with a crown, King Cepheus.

The wife of Cepheus, Queen Cassiopeia looks like a W shaped formation in the sky. This is represented by Cassiopeia being chained to a throne in the heavens as punishment from Poseidon.

The most notable feature of Pegasus is the giant square, the bottom left of it actually being part of the next constellation being mentioned. Besides the square, there are other stars that help give it the shape of a horse head and two legs, with the square representing his body and wings. In older mythology, the rider was Bellerophon; Pegasus wasn’t added to the story of Perseus until much later.

In the story, the daughter of Cepheus and Cassiopeia was chained to a rock as a sacrifice to appease Poseidon after the sea god sent Cetus to destroy the kingdom. While the three brightest stars may not form much of a shape, the rest of the stars can be traced to form a figure resembling a chained princess. Andromeda also contains the famed Andromeda Galaxy, which we will go over in the Deep Sky Objects section of this page.

More further south, and only being mentioned because of the story’s connection with the autumn sky, the stars are not as bright as the others. However, they can be traced to form a sea monster with a body, neck, and head! But you will need a moderately dark sky to see them all.

The hero who kills Cetus and saves princess Andromeda, Perseus is next to Cassiopeia, and while initially shaped like a Y, you can use other stars in the constellation and actually make out a warrior hero of some sorts holding a sword, or holding out his hand to save the princess.

Under dark enough skies, you can see this galaxy with the naked eye as a faint smudge. It’s actually easier to spot with binoculars, but through a large telescope you can start making out M 32 and M 110 as faint companion galaxies near the Andromeda Galaxy. It is the nearest major Galaxy system to our own, and the largest galaxy in our galactic neighborhood called “The Local Group.”

While this galaxy is not as bright nor does it look as pronounced as Andromeda’s, this galaxy is a sure test to see how good your dark sky is. Located in Triangulum, a small constellation shaped like a triangle near Andromeda, this galaxy can be seen with the naked eye using averted vision under decent dark skies. But under exceptional viewing conditions with no light pollution, this can be spotted directly with the naked eye.

Between Perseus and Cassiopeia is a brighter patch of the Milky Way you can see with the naked eye. With binoculars or a low powered scope, you can resolve it into two separate open clusters! This is a popular target for telescopes, and another one of my favorites to show.

Jupiter (top left) and Saturn (top right) above the observatory
Well… what’s wrong with this?
Leftover tropical moisture gives amazing lighting and sunsets over LA
The approaching storm over the Observatory
Tropical Storm Kay, winds howling at @griffithobservatory
To quote the late great Sam Kinison, “come here, you see this? This is sand! You know what it’s gonna be 100 years from now? It’s gonna be sand! You live in a DESERT!”