Ursa Major is quite possibly our most important constellation in the northern skies. The seven stars that make up the Big Dipper historically have been used to help our navigation in the sky, but it does so much more than help us find the North Star. 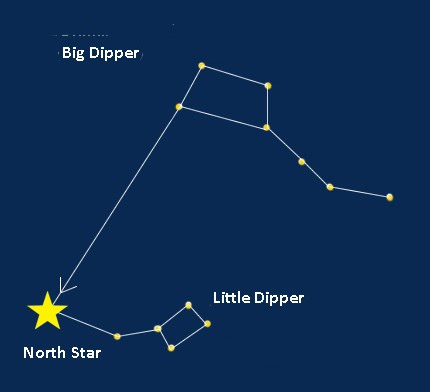 We’ll start with the easy task. Many people don’t realize that Polaris, our north star, is not considered a bright star. While it is bright enough to be used for navigation purposes dating back many centuries, from a city it is barely visible to the naked eye. But still, it is fun being able to use the Big Dipper to find it and show people how to find it.

Once you know where the Big Dipper is, you use the two stars that make up the side of the “pan” and trace an imaginary line as you point. Using this method, you will eventually point straight at Polaris.

The Big Dipper as a Seasonal Marker 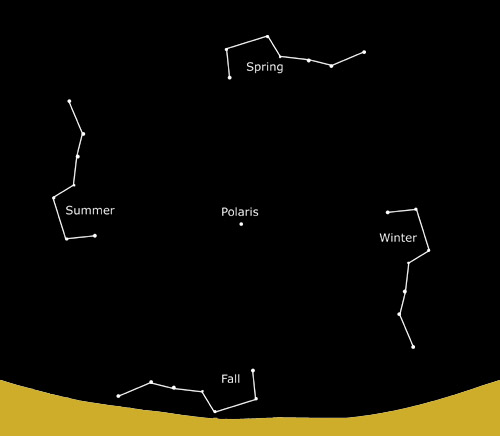 The Big Dipper is visible throughout the entire year from mid northern latitudes. Due to the earth’s rotation, and the northern constellations appearing to circle around Polaris, you see it in different positions depending on the season.

The Big Dipper (but not the rest of the constellation) doesn’t set below the horizon if you are north of 35°N latitude. Further south during the autumn and winter months, it dips at the horizon, and you see less of it the further south you go during those months.

You can use the same method you used to find Polaris to find other stars in the sky, all by using the Big Dipper as your guide.

Use the top two stars of the pan and you can find Capella, the brightest star of Auriga.

Using the top left and bottom right stars of the pan, and  you can trace a line towards Castor, one of two bright stars that make up the Gemini constellation. If you use the same two stars and go the opposite direction, you can find the constellation Hercules.

Go outside and try this out, especially during the spring and summer months! Just be advised that you may not see all the stars because of the time of the year, as they may be below the horizon. Also remember, during the spring months, the Big Dipper is upside down!