There are few places in the United States where one can see the Milky Way from their front porch. The Hopi Reservation is one of them! The Hopi are very privileged to have such a sky directly above them!

The Hopi are very spiritual people who have inhabited the same patch of land for over a millennium, far longer than any other tribe in North America. Because of their intense bond together and push for independence from many outside influences, they have managed to keep their traditions alive while modernizing in some but not all ways.

One such tradition is an avoidance of looking up at the stars because of intense beliefs in Kachinas – spirit beings – that are in the sky and out of respect and reverence must avoid looking at them. However, it’s impossible to see the glamorous sky from the reservation and not wonder what else is up there, and as I am finding out, there is a big interest among the Hopi tribe.

Through my father, I became involved with Restoring Touch Inc, a non-profit charitable organization based in Riverside, CA.

For decades, RTInc has done many practical acts of compassion in places such as the Hopi Reservation in Arizona. Besides special projects in traditional villages such, many acts are events which include games, crafts, and even a magic show for the children. Because of these acts being done with 100% respect for their culture and traditions, RTInc has a special relationship with the Hopi tribe.

My first trip to the Hopi Reservation was in the summer of 2013, and because Jack Lankhorst, the CEO and leader, knew that I had a telescope and knowledge of the heavens, he insisted I bring it for this trip because I was told someone had a huge interest.

While there is a lot I can say about this first trip, to keep it brief I will simply say that what I showed to the couple named Molly and Craig had a huge impact, and I remain friends with both of them. Because of their status within the tribe and their village, I would say they are rather important yet very amazing people to get to know.

We had three planned events in coordination with the Hopi Public Library, one on each day we were staying there. After going over the activities our team was doing, I brought it up to our Hopi coordinator and sold her the idea of having people look at cool things through telescope as part of the event. Having seen the public reactions at Griffith Observatory, I couldn’t wait to see how the Hopi’s would react!

After being clouded out the night before, the chance finally came on Halloween, in the morning at the Tribal Center in Kykotsmovi Village, the Hopi capital.

As there was a third quarter moon high in the morning sky, the perfect object for daytime viewing. Children, many of which were dressed in Halloween costumes, would arrive at the center via bus, go through the building to be met by our team handing out treats and crafts, and my telescope was set up outside to be the last thing they saw before they went back to school. 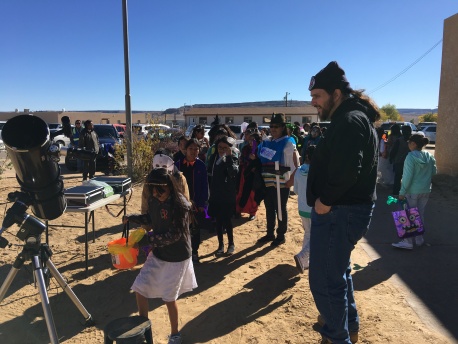 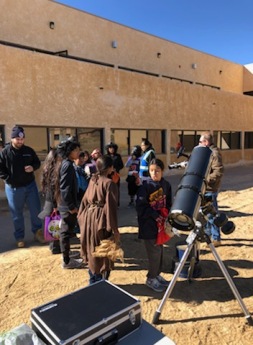 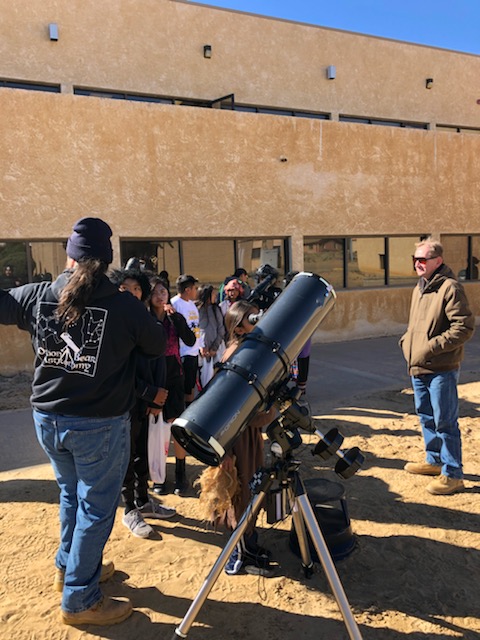 Children and adults alike both enjoyed their view of the Moon, and it was amazing to talk to them while waiting in line and getting to feel what they knew. They definitely knew the basics, and some even told me they had telescopes at home but didn’t know how to use them!

Just as this was happening, Molly recognized me and was ecstatic to realize not only was I there but Jack and RTInc was there as well. Because we were pressed for time, it wasn’t initially in the plans to visit them, but because she saw me, it opened the door for a dinner later that night at their house.

Many adults at the tribal office initially had their guards up and stared at me from a distance, but when they saw that I knew Molly, they got more relaxed and also looked through the telescope.

Among them was the Hopi Chairman himself! As he was on his way to meet Jack, I got to briefly tell him about RTInc, and what Orion Bear Astronomy does for outreach. He was very thankful, and I felt honored to be able to have that brief exchange with him.

Both Molly and Craig, plus the rest of the team got to see impressive views of Saturn, the Andromeda Galaxy, and the Double Cluster during the brief time we were there on this cold autumn night. It was perfect because I could have the scope comfortably outside under a black moonless sky, and literally people could walk outside, see what the scope was pointing at, and then go back inside and warm up!

There was a funny moment where Craig saw a satellite move in front of Andromeda, and he almost freaked out because it looked like a UFO. Molly and Craig’s reactions alone were why I wanted to bring the scope in the first place, and felt more special than any reaction I experience at Griffith Observatory. At the same time, Craig was teaching me more about Hopi culture, especially their relationships and beliefs with the stars.

All in all, an amazing intimate experience inside the village that I cannot wait to do again!

No matter what, whether I can show the heavens or not, I will continue to be part of Restoring Touch Inc and will do more trips when I can. The Hopi will always have a special place in my heart!