You know how a full moon is supposed to bring out the crazies according to urban legend? Well, that may be the case after all!

One sees a full moon and thinks, “well, since there is nothing else to see, it’s time to put the telescopes away.” The other sees a full moon and is mystified by it, and anything to do with one causes them to flood social media with posts about it, especially whenever there is the news of a…. “Super Moon!”

Sure, a full moon looks majestic to most people, but the reality is that to an astronomer, unless there is a lunar eclipse going on, a full moon is nothing special! The brightness of a full moon washes out the deep sky, making the sky just as bad as if you were still in the cities.

So What Is a Super Moon?

The Moon’s orbit is not a perfect circle, it’s actually elliptical shaped, and has points when it’s closer to Earth and when it’s further away.

A Super Moon occurs whenever the moon is full AND at or near perigee, or it’s closest point to Earth in its orbit. When this happens, the Moon is close to about 225,300 mi away from Earth, compared to 251,900 mi at apogee.

When you compare a full moon at perigee vs apogee, then there  is a slight difference in apparent sizes, but not that much. As my former boss has told me, it’s the equivalent of comparing the apparent sizes of a quarter to a nickel side by side viewed from about 7 feet away. To the naked eye, you won’t really tell all that much! 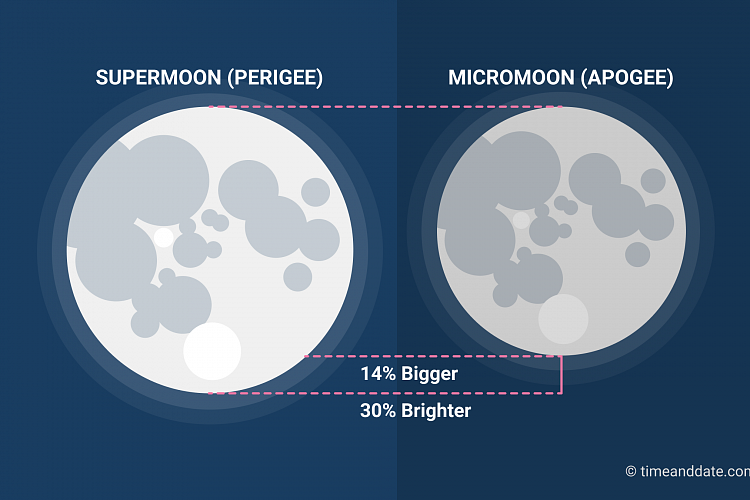 However, when you compare a Super Moon to a so called “Normal Moon,” then you start wondering why the news media and so many social media posts make such a big deal and treat these events as don’t miss celestial phenomenon!

When it comes to the picture listed above, I took the two side by side images of March and April 2021’s full moon with the same telescope and same camera through prime focus method – using a focal length equivalent of a 1000 mm focal lens or about 41% zoom magnification for those asking. March’s full moon wasn’t being labeled as a “Super Moon” in media headlines, but April’s was… so

And again, to the naked eye, you WON’T notice that much of a difference in apparent size! When the Moon is higher up in the sky, it will look just as big as any normal full moon that you’ve always seen. The only difference is that you’ll notice it’s slightly brighter.

But What About Those Pictures?

You mean the impressive shots where you see a full moon low in the sky behind a tree, a building, a mountain, or anything such as that? Or how about the shots where the Moon appears to be wider than a city skyline?

That’s all photography tricks! It’s rather easy, all you need to do is plan your shot around the time the Moon is rising or setting, try and get in the correct angle so the Moon lines up with your object, get your camera ready, and make sure you use a telephoto lens!

What Causes The Moon and Sun to Appear Larger Near the Horizon?

It’s an optical illusion! The Moon isn’t changing sizes at all!

This is also something that hasn’t been fully explained yet, as it’s still being debated. But here is the best way I can explain it:  the Moon near the horizon now has something to compare itself too, while higher up it doesn’t. The same thing actually happens with constellations, they appear slightly larger near the horizon.

The Moon’s apparent size is about the size of a small pill held at arms length. You can take this same pill or a coin, hold it at the horizon, note it’s apparent size, and then move it up to your zenith and you’ll still see the pill look the exact same size! The size never changes no matter where you hold it!

What causes the Moon to look orange when it’s rising or setting sometimes?

It’s caused by an abundance of haze, smoke, dust, and/or air pollution in the sky. Naturally, this haze can simply be water vapor, smoke from nearby wildfires, or volcanic ash, and it may not have anything to do with air pollution caused by emissions.

It’s the same reason why the Sun sometimes darkens before it’s about to set. It makes for impressive pictures for sure, but it’s not an actual celestial event.

If you live in locations with a fair amount of haze or air pollution, then you see this happen more often than not. But if you go out to a place that is perfectly clear of it, then you’ll notice the Moon never changes color as it rises or sets.

I’ve met people who confusingly call these sights “Blood Moons,” which of course these are not!

Why Are Full Moon’s Named and Hyped Up So Much?

Each Full Moon has a name. These names are named due to past lore, especially from Native Americans and seasonal associations with them, like for example a “Pink Moon” is associated with springtime blooming Pink Moss wildflowers in North America, and a “Corn Moon” is associated with harvest, or the right time for Native Americans to harvest corn. All of these things are tidbits you can look up. It won’t be the last time you hear about “Wolf Moons” or “Hunter’s Moons.”

A Harvest Moon is the closest full Moon to the Autumn Equinox (September 22), so sometimes it’s in September, other times it’s in early October. It is NOT an orange looking moon rising above the horizon!

A Blue Moon is the second full moon in a month. As each month lasts about 30 days, and the moon cycles its phases every 27-28 days, occasionally, but usually once a year, you get two full moons in a month – which is where the phrase, “once in a Blue Moon,” comes from. No, it won’t actually look blue!

A Black Moon has many meanings, but it is usually the second “new moon” in a month – the opposite of a Blue Moon. As with any new moon, you still won’t be able to see it – for people like me it’s another opportunity night for stargazing under a dark moonless sky. Sadly, I’ve seen social media posts talking about a Black Moon, and comments from people who don’t bother to do a simple internet search saying “I’m going to go out to the desert and watch it!”

Stop Getting Fooled by Click-Bait Articles!

Unfortunately, that doesn’t stop casuals from hearing about it, and asking astronomers about it. We’re happy to explain the reasoning behind the name and apparent change in appearance when behind atmospheric smoke and haze. But we hate the disappointment when the asker realizes they’ve inquired about something that either isn’t what they expected, or realized it’s nothing special. “Wait, you mean the moon won’t actually look pink or blue?” “So a full moon on Halloween isn’t really anything to marvel at?” “So it’s not actually orange right now?”

In reality, you’re just seeing another full moon from Earth. You’ll see another one in 28 days!

Even if the Super Moon happens to coincide with a lunar eclipse, don’t expect the eclipse to look any larger! To the naked eye, it will still look like any other lunar eclipse you’ve seen, and there’s no difference through a telescope!

You have now been educated on Super Moons! No self respecting astronomy enthusiast cares for full moons, especially super moons all that much. To actual astronomers, Super Moons are non-events that are not worth losing sleep over!

Do us all a favor and stop getting fooled and hyped up by click-bait articles from websites desperate to get your views! There are FAR BETTER things in the sky to look forward to, events that actually are WORTH waiting around and getting your telescopes set to view!