Let’s go over some major points.

400,000 People Were Directly Involved In the Missions

It was not just the astronauts who flew the missions, it wasn’t just the people at mission control, it was thousands of engineers and scientists, as well as those who constructed the rockets, the components in each Saturn V, the launch platforms, and more!

Big Hollywood productions usually involve crews of a few hundred to a couple thousand people at most… and we all know that’s for fake stuff! You would think that if the Apollo missions were faked, one person out of the 400,000 involved over a decades worth of work would have something to gain off leaking that knowledge.

Civilians Could See The Launches

People attended and saw each launch in person. Why would NASA make a big spectacle in front of thousands of civilians for a hoax?

Amateur astronomers could also watch the rest of the launch. People on other sides of the globe could see the Saturn S-IVB third stage fire, then vent its leftover propellants with their naked eye. Others could see such events in their telescopes and even took were images of them.

Those equipped with radio telescopes could also listen in on the conversations between the astronauts and mission control if they were able to track their signals.

Wait… Where Are the Stars?! 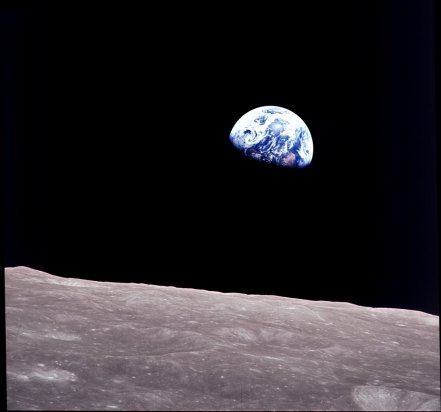 This is a very common claim that proves the images, especially the famous image of Earth rising from Apollo 8, are in fact fake. But there is one major component that people overlook… the exposure in the camera!

The Earth and Moon are quite bright, and to get the proper light that can image them both, you’re leaving out the lesser photons that reveal the stars. All one has to do is increase the amount of exposure, and voila, a sky full of stars… but wait… now the Earth and Moon are overexposed!

Artist Representation of overexposed Earth and Moon to show stars.

This is a big thing when it comes to photography at night, or for astrophotographers like me.

This is another thing that people notice and use as proof. They say that because the shadows aren’t parallel, then they must be on a sound stage….

On uneven terrain filled with rocks, with the lunar surface at the sites have, the Sun does in fact cast uneven shadows. You can even see this for yourself if you go outside, and look at pylons or cones on a grade… in a matter of perspective, you do in fact see the shadows appearing uneven. If you don’t believe me, the men of Mythbusters have proven this as well!

What About the Flag Moving?

It isn’t. After the flag is let go, it settles gently and then doesn’t move at all in the remaining footage. If this was in a sound stage, that flag would clearly settle down like it does on Earth, and if there was wind from a fan, would’t the flag appear to be blowing?

Astronauts from Apollo 11, 14, and 15 left large reflecting mirrors at their sites, and with a powerful enough laser, you can shine it at the exact spot and get a reflection back!

Several observatories do laser ranging on the Moon to calculate distances. There are many experiments that have been performed thanks to these laser arrays, including how we know the Moon is moving away from us at 3.8 cm per year.

So tell me… who put those reflectors there?

Moon Rocks are UNLIKE Anything On Earth

Astronauts brought back hundreds of independently verified Moon rocks. There is a major characteristic they have that Earth rocks don’t have: super tiny impact holes from dust impacts.

On the Moon, there is no atmosphere to burn up tiny particles entering from space, so they hit the ground and leave super tiny impacts. Scientists have even found the impacting dust particles on the rocks themselves! Rocks like this wouldn’t be possible on Earth because our atmosphere burns up these tiny particles, sometimes you see them as meteors in the sky!

While You Cannot See The Landing Sites From Earth, But You CAN See Them As Imaged by the Lunar Reconnaissance Orbiter (LRO).

Most visual telescopes on Earth can’t resolve anything less than a tenth of an arcsecond – which is about how big Pluto appears from Earth. Even within that amount of resolution, the sites are super tiny, and it’d be like looking for a needle in a football field from the nosebleeds.

The LRO is orbiting 30 miles above the surface of the Moon. It contains a high definition camera that CAN resolve super tiny features that cannot be resolved on Earth. It has taken pictures of the Apollo sites, and reveals them 50 years later. You can easily do a google search yourself if you don’t believe me!

One small punch for man, one right hook for mankind!

Seriously… as Neil Degrasse Tyson has said, “We went to the moon nine times. We’d have to fake going to the moon, nine times! You know how much effort and money would have to be spent FAKING nine missions? It’d be much easier to just.. go!”

These are some of the things that can be used as proof that humans did land on the Moon, and there are many others that can help you out if you’re still not convinced. However, if you keep shifting the goal posts, and keep claiming, “but that could be faked” after every debunking thrown your way, then we honestly have nothing else to say! Go on believing in your conspiracy theories, and while you’re at it, go ahead and tell me how the Moon is made of cheese, or that it will turn green on April 20!