The Geminids are an annual meteor shower that usually peak between December 13-14. The Perseids are more known because of the comforts of warm August nights, but if you brave the cold, the Geminids can give you a better show!

Click here to learn more about meteor showers in general.

The Geminids get their name from the fact the meteors appear to radiate from the constellation Gemini. Usually, meteor showers are caused by Earth passing through a trail of debris left behind comets, but this particular shower is caused from an asteroid that is thought to be an extinct comet – 3200 Phaethon.

During peak times, you can see as many as 60-120 per hour! Geminids are also slower, making them easier to spot when they whiz by the sky at close to 22 miles a second (normally they’re nearly twice that fast!).

So what time is the peak?

The time when Earth enters the densest part of the debris dust left behind 3200 Phaethon is predicted to be 12:47 am UTC, or 0:47 am UTC on December 14 (source), which translates to 16:47 or 4:47 pm Pacific/ 19:47 or 7:47 pm Eastern on December 13. That means the shower will be amazing from sundown till sun up, and unlike most showers where you often wait until after midnight for the radiant to rise, Gemini will already be visible in the sky after dark, and the shower will be in full swing around 9 pm – so if you want to catch a few meteors and then go home earlier because you got school/work in the morning, then you can do that.

Of course, those who stay up and out all night, and view the shower when Gemeni is highest in the sky will be rewarded with over 120 meteors per hour. If you’re trying to capture one through photography, you’ll definitely have a good chance! 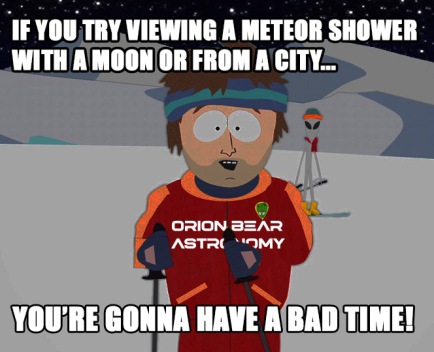 That Zenith Hourly Rate of 120 per hour assumes the radiant (the constellation Gemini) will be highest, and assumes your sky is dark with no moon interference or light pollution.

Your best viewing will be from a dark location away from the cities, as light pollution does lower your rate of what you’ll see. Don’t be that person who tries to view from the city hoping to catch one meteor, gets frustrated they didn’t catch a meteor right away, and then goes back to bed.

The Moon will reach “new moon” phase on December 14. That means you have an entire night with no moon interference, and during peak hours you’ll have plenty of meteors to catch!

It’s a December night, so make sure you are prepared to be outside in the cold! You could be spending long periods sitting or lying down on a lawn chair or bundled in a sleeping bag waiting to catch a meteor. If you plan on being outside throughout the night, layers are the key!

If the meteors don’t appear right away, chances are you’re going back inside out of frustration while cursing the heavens – be patient! Meteors won’t be equally spaced either – you may see a burst of a few followed by periods of nothing.

Let your eyes adapt to the night sky, which can take up to 10-20 minutes – this means don’t keep checking your phone screen as the white light will ruin your dark adaptation and make it harder to spot the dimmer meteors.

Even though the meteors will radiate from Gemini, have as wide of a view of the sky as possible, as they will streak anywhere in the sky. It’s best to look up, and not restrict yourself to areas above the horizon.

Many national parks, especially those in California, are currently under orders to reduce their capacity, and you should always check to see if the respective campground locations are closed, or even if the park roads and parking lots are open to the public.

Stargazing and Meteor Shower viewing are social distancing activities, and thus it’s easy to practice it with the need to get away from people. If you can find a spot in the remote countryside where you’re least likely to encounter another stranger, then do so. However, if you feel unsafe driving to a far location, or if you are feeling ill, then DO NOT GO!!!

Good luck and have fun! Wishing you clear skies!

One thought on “Look Up! Geminids Meteor Shower Peaks December 13-14”