This page is meant to serve as a general guide for what you can expect at certain magnifications while using your telescope!

Some objects can look spectacular in high magnification, while other’s won’t;  only the the moon looks good either way. More often times than not, however, the local seeing conditions in the atmosphere determine how much you can zoom before it gets too blurry and distorted.

With all of this out of the way, here is what you can expect at certain magnifications!

25-30x –  still looks small in the FOV, but you can still start making out large features on the surface depending on the phase.

40-80x –  During crescent and first/third quarter phases, the view of all the larger craters is spectacular! For eclipses, up to 60-80x is the most you should zoom so the entire disc is still visible in your FOV.

100x – The disc of the moon now fills up your entire FOV inside the eyepiece, unless you are viewing a thin crescent in the middle. The closer views of the larger and smaller surface features offer a good variety.

200x – Your entire FOV covers about half the surface of the moon. You start seeing smaller features you didn’t know were there, such as small peaks inside craters!

300x and above – You start feeling like you’re flying above the surface of the moon. Larger craters that looked tiny at lower magnifications now take up the entire view! 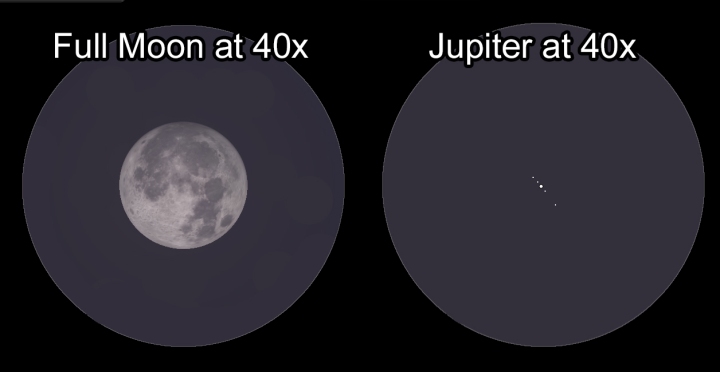 Below 50x –  The planetary disc is small and white, but you can still see two four star-like points in a line, which are in fact moons orbiting the planet. This is what Galileo saw in 1611, hence why the four moons are nicknamed “the Galilean Moons.”

50-100x –  The moons appear more spread out, and you can barely start to see the striped pattern of brown and white cloud bands

100x – This is a great all around view of Jupiter and its moons, as you can see cloud detail on the planet, and see all four moons all in the same FOV. The Great Red Spot can also start being seen as well as a tiny orange colored “pimple” on the planet (if it’s on the side facing Earth).

200x and above – Details on Jupiter are a lot more visible, and the Great Red Spot looks like a small circle. You can watch Io, the closest of the four, either transit in front or behind the planet. You can see shadows of the moons crossing the planet if you are looking at the right times! 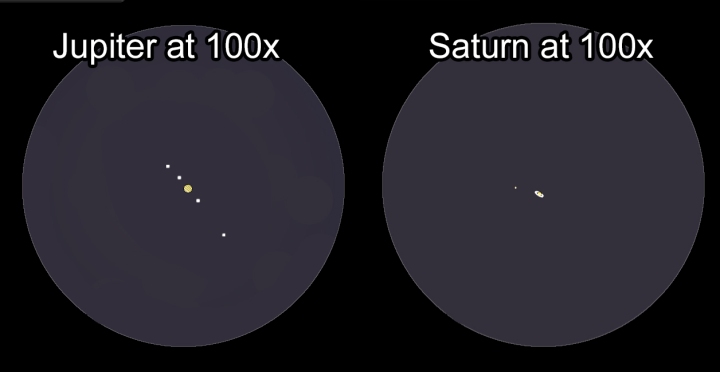 Below 50x – Looks like a tiny eye in space, or an oblong shaped planet depending on the tilt of the rings. If Saturn’s rings are tilted exactly towards earth, they are almost invisible. Saturn’s biggest and brightest moon Titan can be spotted close to the planet.

100x – The rings are now easily visible, though to some they still make Saturn look like an eye. A sharp eyed viewer can see the yellow color of the planet and the white color of the icy rings. Titan is further away from Saturn, but other moons closer to the planet like Rhea are now coming into view. 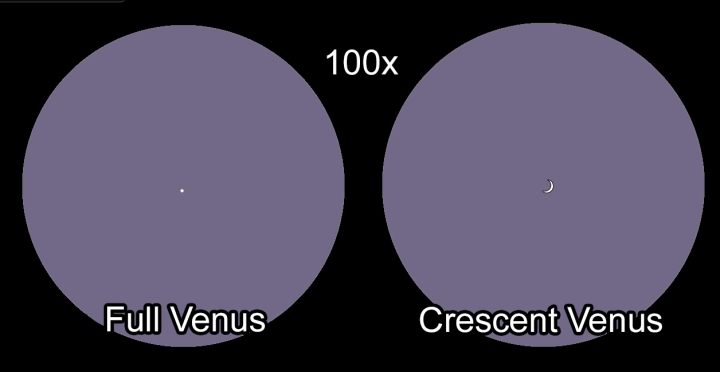 Venus is bright enough to be observed with telescopes during the day if the planet is far enough away from the Sun’s glare. When it is further away from the sun, you can see it in the night sky for up to a few hours before it either sets or gets lost in twilight.

Below 40x – This is about the same level of magnification that Galileo had. As he could see the phases of Venus with his small telescope, so will you! When Venus is in a crescent phase, it’s very obvious, and I can’t tell you how many inexperienced viewers mistake it for the moon at first! As Venus gets further away, the crescent gradually changes shape into a half circle, and then into a full circle, yet the disc gets smaller due to the increase in distance. Something like this is what led Galileo to conclude that Venus was orbiting the Sun!

40x and above – Since Venus is covered with white carbon dioxide clouds, you will only see a white planet whether it is day or night.  Increasing the zoom will make the phases much easier to see, especially the phases for when Venus is further away from us than our Sun. 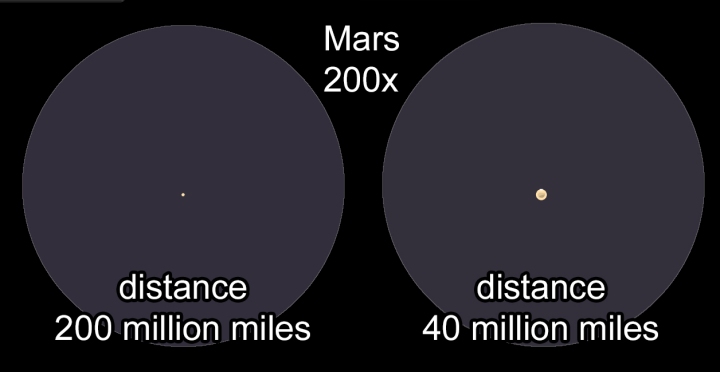 Because the distance between Earth and Mars varies a lot, a good view of Mars is surprisingly not as common as you think.

Below 100x – Mars appears like a bright rusty salmon colored orb. Depending on its distance, it’s either a really bright star, or a tiny disc in your FOV.

100x – IF the planet is close enough and the air is steady, the apparent size is almost as big as Jupiter, and  you can start making out darker albedo features and even an ice cap if you know where to look. But if the planet is far away, good luck seeing any features!

200x and above – If Mars is close enough under good seeing conditions, then it definitely appears impressive. But bad seeing conditions, and viewing from locations with a lot of haze makes Mars look distorted. Usually, if you can see some darker albedo features and the ice caps, then you have a good view. If you cannot, even zooming in higher will not fix the problems. Colored filters may help bring out some of the details.

Mercury is much harder to spot because of its close proximity to the sun in the sky. But ever so often, it gets far enough to be visible when the sun is below the horizon. Still, it’s a small planet, therefore it won’t appear that big.

below 100x – Mercury still appears star-like in your telescope.

100x and above – Like Venus, Mercury also exhibits phases, but you don’t glimpse them until you reach 100x.  The higher you go, the phase shape appears bigger in your FOV and is much easier to see, but the planet will still appear white due to its distance.

During Solar Transits – In rare events when Mercury is directly crossing the face of the sun, you can see a tiny black dot – the disc of Mercury – gradually move across the sun’s disc. Since Mercury is so small, it’s almost impossible to see with the naked eye using eclipse glasses, but through projection methods, or through telescopes with proper filters, the transit is easily seen even at lower magnifications.

There is not much difference between these two planets when it comes to night sky observing.  Both planets are similar in size, but they are both very far, with Neptune being much further away than Uranus. Even large professional grade telescopes have trouble detecting features from earth due to their distances. But if you can find Uranus, then you can find Neptune as well!

Below 100x – Both Uranus and Neptune appear star-like and can be indistinguishable from background stars. Use a good star chart to figure out which one is in fact the planet you’re looking for. You should notice that the planets’ lights are steadier than the surrounding twinkling stars.

100x – Uranus starts showing a tiny pale cyan colored disc. It appears about as big as Mars appears when Mars at its farthest distance from Earth. Neptune still appears like a pale blue star.

200x and above  – Though still small, Uranus’ disc is much more obvious and it starts looking like a planet. Its moons are still too far and dim to see. Neptune starts showing a blue tiny disc if the air is steady.

It depends on the angular separation between the two companions. If they’re separated enough, they are resolved well at low power, but others will require a minimum amount of magnification to resolve the angular separation. While you could divide 300 by the A.S. to see where you can start resolving the two stars, you should divide 750/A.S. to have the best minimal magnification.

Keep in mind that seeing conditions may make it difficult to resolve double stars tighter than 2″ in separation, plus you risk magnifying more than what the telescope can theoretically resolve when using smaller telescopes. If your telescope can resolve much more than the best minimal magnification, then have at it and see how high you can go!

Open Star Clusters – Some open clusters such as the Pleiades are visible with the naked eye, and through a telescope should only be viewed at LOW power to see the entire cluster. Others such as The Double Cluster (Caldwell 14), Ptolemy’s Cluster (M7), and Beehive Cluster (M44) are visible as fuzzy smudges to the naked eye, and through telescopes at low power reveal a large group of stars. Some of them form shapes after their namesakes, such as Caldwell 13 (the Owl Cluster) and M11 (Wild Duck Cluster).

At this point, it matters how much light your telescope collects, hence the phrase “the bigger the better!” While I have certainly observed the brightest nebulae, globular clusters, and galaxies with a small telescope, they do appear dim and don’t show much structure. The larger the aperture, the brighter these objects will be!

Nebulae – Through telescopes, you can see some structure and glow from the gas clouds.  While some nebulae have hints of green and blue tints, they will appear mainly gray due to your own eyes not accumulating enough light in the dark to see color. Therefore, if you want to see obvious color, then you’ll need long exposure. Even with a telescope, some nebulae are invisible with your eyes, and can only be seen with enough exposure.

Globular Clusters – Through telescopes, globular clusters appear as dim gray “snowballs” in space. Since you need to gather as much light as possible, it’s best to view at a low power with a wide eyepiece. If your telescope has enough aperture, and the globular cluster is big and bright enough, then you can definitely resolve individual stars when using higher magnification – just don’t expect them to be as bright as their pictures! M13 and M22 are the two largest, and an 8″ telescope can resolve them pretty well under good viewing conditions.

Galaxies – Galaxies are notoriously disappointing through a telescope because of their dim appearance. Because you’ll mainly see their cores and not their spiral arms, do not expect to see any form of structure and detail unless you have a large enough telescope! M81 and M82 can be seen as two gray smudges  in the same view even with small telescopes. M51 you can definitely tell there’s two “core” structures interacting with each other. The spiral arms of M101 can be glimpsed with fairly large telescopes under dark clear skies. Even then, they won’t look exactly like the pictures, but you’ll at least get more light from them. Long exposure photography is the reason why we know what these objects actually look like.