Solar Eclipses are a class above their lunar counterparts. While they can occur more often anywhere on Earth, their visibility from a given location is much more rare! This gives them much more of a mysterious edge, and are a reason why people travel all around the world to witness one in person!

As stated before, a solar eclipse actually occurs more often than a lunar eclipse. On average, they occur once every 18 months, which makes it two eclipses every three years! But when you consider how often they are visible from a given location, that is a different story altogether.

While you may see several partial eclipses in your life time, unless you travel to be within the path of totality, chances are you will NEVER see a total solar eclipse! For example, the last time a total solar eclipse was visible over Los Angeles was 1724. Sure, in this century there will be several that are within reasonable traveling distance as well as many near misses in California within this millennium, but you will have to wait until 3290 if you’d rather just stay in L.A!

Trust me, travelling to see a total solar eclipse is worth every penny!

During a solar eclipse, the Moon casts a shadow on Earth. There are two parts of the shadow: the penumbra – the larger outside shadow and the umbra – the narrow inner shadow.

There are also four types of solar eclipses:

Partial – Where the Moon appears to cover part of the Sun. Whoever is inside the penumbra will see a partial eclipse.

Total – Where the Moon completely covers the Sun. Whoever is inside the umbra along what is called the “Path of Totality” sees a total eclipse!

Annular – Where the Moon appears too small to cover the entire Sun’s disc, and a bright ring of the Sun’s disc still remains. In this case, the central shadow is called the antumbra – the region where the obstructing body (the Moon) appears entirely within the light source (The Sun’s disc). The path traced by the antumbra is called the “Path of Annularity.”

Hybrid – These are much more rare, and are simply eclipses that appear total in some locations and annular in others. It’s caused by the earth’s curvature making the distances change, thus locations in the west and east of the path are too far from the umbra and experience an annular eclipse, while locations in the center of the path are close enough inside the umbra and see a total eclipse. 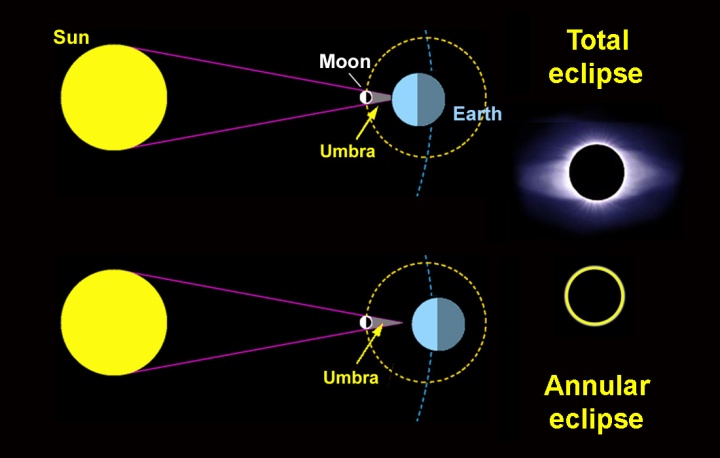 As our Moon covers more of the Sun, you do notice that something feels off. Animals start thinking that night time is approaching and start settling in. While the eclipsing Sun still appears bright, the landscape is starting to get dimmer.

Unless you’re using special viewing devices that protect your eyes, the eclipsing Sun still appears too bright to the naked eye. However, nature does have a way to show you an eclipse is happening! You can see a phenomena on the ground caused by pinhole projection, where you notice a bunch of crescents on the ground that weren’t there before. As the Sun is shining through the leaves in trees and bushes, their tiny openings are pinhole projecting the image of the eclipsed Sun! You can even make your own pinhole projectors with just your hands, or construct your own with everyday materials. 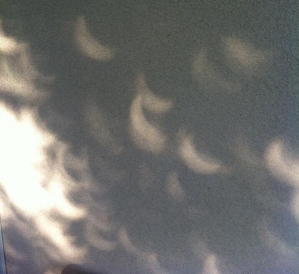 Trust me, there is a huge difference between a 99% and a full 100% total eclipse! 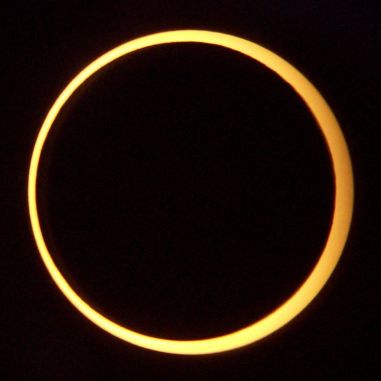 Admittedly, an annular eclipse is not as spectacular as a total eclipse, but they are still worth checking out! Annular eclipses are caused when the Moon is at or near apogee, and is simply too far away to look big enough to cover the entire disc of the Sun.

When this happens, as the moon crosses the middle, a ring of the sun’s bright disc remains, and you have an annular, or “ring of fire” eclipse (the word annular comes from the Latin word “annulus” meaning “ring”). If you do get within the path of annularity, it is still a treat to see the Sun and Moon perfectly aligned in the ring formation. Depending on how far away the Moon is from Earth, the Sun can be anywhere between 85% covered to 99% during such an eclipse.

However, during an annular eclipse, even if 1% of the Sun’s disc is shining around the Moon, you will not see the corona because the remaining Sun’s disc is too bright. Depending on how much of the Sun is covered, the sky can  dip slightly in brightness but not at all close to the levels you’d see during a total eclipse.  The landscape on the other hand still does appear in shadow, and it is still quite an eerie sight.

As for the pinhole projections caused by the trees, you can see the annular eclipsed Sun being projected on the ground as little rings!

The next Annular Eclipse over the United States will be October 14, 2023. Click here to check out a detailed map of the eclipse path.

You can read about my experience with the May 20, 2012 Annular Eclipse here!

The most spectacular of all eclipses, this will happen if the Moon is close enough and big enough to cover the Sun’s disc! If you are among the lucky ones inside the path of totality, you are in for a treat!

After experiencing a partial eclipse for 70 minutes and with totality approaching, if you haven’t noticed any differences in daytime brightness, you will now!

As the final minutes wind down, you suddenly experience a rapid decline in brightness. The sky is getting darker, and the shadows on the landscape are fading away! It’s as if someone is slowly turning a cosmic dim switch, with each second the switch being turned slightly faster. You look up and you can clearly see the Sun has been reduced to a very thin and small sliver!

The moment of totality has arrived! If you are with a group of people, or within a large crowd, it’s perfectly natural to start cheering!

As you see the flash, a “last gasp” of the sun’s light as the moon completely covers the sun, you see the ghostly white corona appear as the black disc is silhouetted in the middle. Some of the brightest stars and planets can also appear during totality, but they’re not the focus! The sky above is a dark shade of blue, while near the horizon you can see a familiar red-orange twilight glow in all directions. The corona appears as some of the purest light you will ever see, and it adds to the eeriness of the experience!  Then you will see another flash, the corona fades away, and the sun is coming back!

Totality will only last a few minutes, but the memories will last a lifetime!

Once you experience one for yourself, you finally understand the mentality of eclipse chasers, people who travel around the world to continue witnessing the thrill and wonder of a total solar eclipse! To see at least one in your lifetime should be top on your celestial bucket list!

The next total Solar Eclipse over the United States will be April 8, 2024. Click here for a detailed map of the path!

How To Observe a Solar Eclipse

Comet C/2021 A1 (Leonard)
I’m out trying to find some guy named Leonard in the sky… anyone seen him?
Low, but strong inversion layer over LA
“Well I’m sorry, Ursa, but I don’t dip that way… you dip the way you wanna dip, I’ll dip the way I wanna dip!
Did I mention it was really foggy and misty last night? Even with a dew shield I kept having to blow the air off the front corrector lenses on the C11 Edge scope I used to shoot the eclipse.