The sky offers a variety of things to see. Besides the constellations and planets, there is always something for you to look at. Here are ten features you can see in the sky without a telescope, and six with. 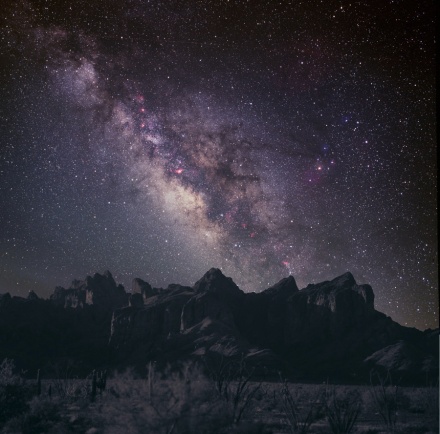 Seeing the Milky Way at Night

The Milky Way Galaxy is a treat to see from a dark location. It may not seem like much at first, but the hazy band that is often mistaken for a cloud is actually billions of stars too far to resolve individually, thus the familiar band of light is what we see. There are two distinct sections we see, summer and winter – with the summer section being brighter and more defined due to being in the direction of the center of our galaxy!

Depending on which shower you view, as long as there is no moon interference or light pollution, you will have a decent showing! Catching a few shooting stars every minute during peak times is a treat. Sometimes you see brilliant meteors that streak and leave glowing tails. Other times they explode high in the atmosphere, giving off a small “pop!” These events are fun to plan star parties around, and are great excuses to get outside at night.

Chances are, you have seen one total lunar eclipse and possibly a partial solar eclipse in your lifetime. Lunar eclipses, where we see the familiar “blood moon,” are always a beautiful sight in the night sky. As the entire night side of the earth can see a lunar eclipse, they are shows for the masses. Solar eclipses are great when viewed safely with filtered glasses, and offer an eerie feeling the more the Moon covers the Sun. Total solar eclipses on the other hand should be on your bucket list!

Watching the Sunrise/Sunset on Equinox and Solstice Days

Sunrises and Sunsets on a normal day are fine, but seeing them on equinox or solstice days offer you something different. During winter solstice, you see the Sun rise in the southeastern sky, the furthest south it will be for the year, and set in the southwest; and during the summer solstice, it’s the opposite – rises in the northeast and sets in the north west. On equinox days, the sun rises due east and sets due west. That is how civilizations kept their yearly cycles before modern calendars took over.

People typically do not notice the Moon and planets gradually changing their positions in the sky. But whenever the Moon appears close to another planet, I’ll often get texts asking me “what’s that star/planet next to the Moon?” The same applies when two bright planets appear pretty close, or form shapes in the sky. The best conjunctions, however, are when two objects are close enough to be viewed at the same time through binoculars or telescopes! This website has a list of upcoming notable conjunctions to check out by year under “The Sky” page.

Most comets are too small and dim to see with even a small telescope – so much so that you may not realize that there can be quite a few comets in the sky and we wouldn’t be aware. Comets that get bright enough to be seen with the naked eye are a rare treat indeed. Unfortunately, because of light pollution, naked eye level comets STILL require a dark sky to witness. Great comets on the other hand – well you’re just going to have to wait!

If you happen to live relatively near a launch site, seeing rocket launches in person are almost a commodity. Whenever there is a launch scheduled, it’s not uncommon for there to be announcements so that people in the vicinity know when and where to look. Rocket launches are awesome sights in the sky, especially when they enter second stage and the Sun reflects all the gas being emitted from it! They actually can get so high that they can be seen hundreds of miles away!

There is a period just after sunset and before sunrise when the Sun’s light is at a perfect angle to reflect the light from orbiting satellites. You can tell they’re different from planes not because of the star like appearance, but because you can see how they follow the arc of the sky. The International Space Station appears as a bright “star” that moves slow across the sky. Whenever you see the ISS travel 18,000 mph above the Earth, it just reminds you that we are at work up in space! Because of the low orbit, you need to check when the ISS will be visible above your location.

Viewing the Sun with a Filter

To view the Sun safely, you need a filter that blocks enough light! Just like eclipse glasses, filters can be attached to binoculars or telescopes, and give you closer looks at the surface of the Sun. Different filters give different results. For example,  a visible light filter gives you views of sunspots on the surface, while a hydrogen alpha filter can get you views of prominences and flares!

Observing Venus Through a Telescope

Venus doesn’t appear like much, because its white cloud tops block any features. But gradually it appears to have phases just like our Moon. At times, it appears like a full disc when it’s further behind the Sun, other times it appears like a crescent when it’s between the Sun and Earth – and I can’t tell you how many times people confuse it for the Moon! Seeing these phases remind you that Venus orbits the Sun in front of Earth, as it cannot appear the way it does through a telescope if it didn’t!

Observing a Deep Sky Object Through a Telescope

Many deep sky objects are visible to the naked eye, others are better suited with a telescope! Viewing the deep sky from a dark location offers you a plethora of star clusters, nebulae, and even galaxies to choose from! Besides being beautiful sights themselves, they offer you more perspective on what is out there in the furthest reaches of the universe!

Observing Jupiter through a telescope

Jupiter is often a show stopper when it’s in the sky. Besides appearing as the brightest thing in the night sky besides Venus and the Moon, its appearance through a telescope is even more impressive. Besides seeing the cloud bands and Great Red Spot, you can actually see its four biggest moons, known as the Galilean moons, orbit the planet! Sometimes, you can even watch the moons transit in front of, or behind the planet!

Observing the Moon through a telescope

Even though it’s our closest object in the sky, the Moon always looks impressive through a telescope because it’s so big and bright. With wider view, you can see the entire disc, and start making out features you can’t see with the naked eye. But with a closer view, you begin to start feeling like you’re walking on the surface of the Moon! Sure, the moon itself hinders our view of the deep sky, but it still always wows the audience when it’s seen through telescopes.

Observing Saturn through a telescope

Saturn is the only planet that looks just like its pictures through a telescope! Even at low magnification, the rings can be seen! At high magnification, however, you can easily see a yellow planet with white rings, and even see the Cassini Division, it looks like a black “stripe” that’s dividing the main rings. Saturn is such an amazing object to look at through a telescope that anything after it is tough to follow!