This is a common but good question to ask, but this is also a common argument that Flat Earthers make when trying to prove a stationary Earth. In this article, the movements will be explained, and it will help answer the reasons on how we are moving yet don’t see major parallax shifts in the sky. You will also learn that even though the stars appear fixed, their positions WILL change over time!

Newton’s first law of motion is: An object in motion stays in motion unless acted upon by an unbalanced force. An object at rest stays at rest.

Remember that everything in the sky is constantly moving. You can easily observe the Sun, Moon, and stars (planets included) all rise in the east and set in the west due to Earth’s rotation. It’s easy to think that we are stationary because it FEELS that way, and through no fault of humanity throughout most of its existence, they believed that until the heliocentric model became accepted as the norm.

Because We Are in a Constant Motion, We Don’t Feel It

Imagine being inside a vehicle. When the vehicle is moving at a constant speed, you barely feel it moving, but what happens when you make a hard brake or floor the gas pedal? You feel the force of the vehicle as you adjust before the speed gets constant and you settle back. It’s the same concept with a rotating Earth, moving around the Sun, moving through the galaxy. Because the speeds are constant, you don’t feel like you’re moving.

Let’s say you’re in a fast moving plane or a train. Due to the inertia and conservation of momentum, while inside that vehicle, you can still comfortably toss a ball back and forth without the ball flying to the back of the cabin. The only thing that will alter that course is another force causing it to move.

Even though Earth’s orbital speed does increase by half a mile per second when it gets closer to the Sun at perihelion, and Earth’s rotation has in fact been slowing down over time, it’s so gradual that the effects on you during your time on Earth are negligible.

Shouldn’t We Easily See Any Parallax Shifts with the Stars?

It is true that the diameter of Earth’s orbit around the Sun is about 185 million miles (300 million km). So with that large of a distance between two vantage points, we should easily see the position of a star change after six months, right? It’s not that simple!

With the naked eye, even an approximate 185 million mile wide baseline is too small to be used to measure the parallaxes of stars that are light years away! Only special instruments complete with the right data can properly measure the parallaxes of stars, and even then it’s restricted to those less than 1,000 light years away!

But If the Sun is Moving Through Space, Shouldn’t the Stars Change Positions as we Pass by Them?

Okay, let’s say you’re on a highway with a few nearby cars all moving in the same direction. You can easily tell which cars are going faster and slower. But those with relatively the same speed barely appear to move at all even though you’re both moving. You an also notice everything that’s stationary around you appearing to move at different speeds as the closer objects zoom by, while the further objects barely appear to move at all but eventually, if you are driving long distances, the background scenery does change gradually over time. Do you see where this is going?

The Sun isn’t the only star pulling its planets through interstellar space at 200 km/s, or around 124 mi/s. The other nearby stars are also going at nearly the same speed, and since they’re so far away, you won’t see any noticeable change in their positions, at least not in your lifetime using just your two eyes!

And the Constellations DO Change… Over Eons!

Let’s remember that the stars motions are not all uniform. They are all independent systems at different distances from us. They are not all traveling the same speed, and aren’t even moving in the same direction! That means the stars over time DO in fact change their positions over eons!

Believe it or not, this can be observed with a little patience! There are, in fact, a few close by stars that do show a shift in front of distant background stars! This is called proper motion.  61 Cygni is a great example, as the star that is 11.4 light years away shows a shift by the year!  Barnard’s Star, a star 6 light years away, has the fastest proper motion through our sky, but for it to cover an area of the sky the size of a full moon, it will still take 180 years!

Therefore, you can conclude that constellations that we see today are not the same as they were 100,000 years ago, and in 100,000 years they will again not be recognizable by our current charts!

It depends on the distances of the stars and their speeds. The closer the star, the more it will appear to move. Some constellations will be somewhat similar, while others will have to be renamed something else (as an example, Crux – the Southern Cross, will not be cross shaped anymore).

Definitely check out this diagram! 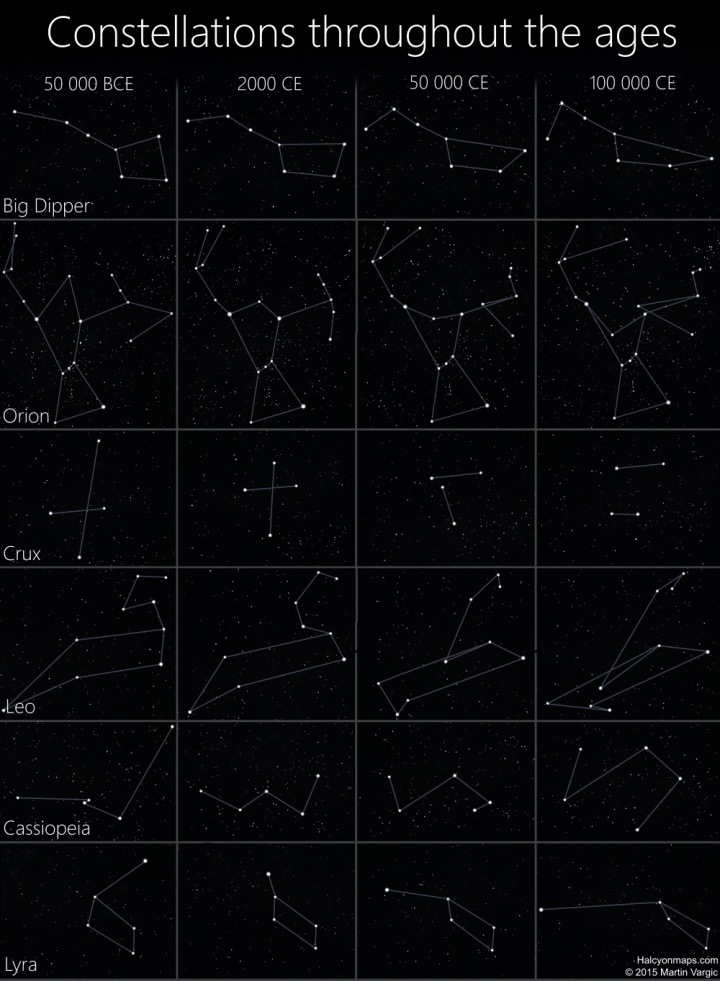 The desktop version of Stellarium actually accounts for the proper motion of the stars, so you can actually see up to 99,999 years in the future and note how different the constellations will look!

This article explained how the stars appear the same despite the multiple ways we are moving through the universe. If you are wondering why the stars change with the seasons, that will be an article for another time!

Cell phone shot of Sunset behind clouds over Ellendale, ND…
Earth’s shadow as seen from a plane!
Griffith Observatory’s Zeiss telescope - pointed west towards Venus, featuring the moon and Los Angeles skyline in the background.
While doing a back of house project which involves the telescope equipment, I took the chance to try and get a good shot of Venus through the historic Zeiss telescope… the key word is “try” as the atmosphere turbulence was too much to get a steady focus. Will try again when it’s higher in the sky.
“The Owl Cluster”
Cirrus clouds and first quarter moon, looking very “angelic”