One of the most common concepts that many can’t wrap their head around is the distances. Objects that are so far away that they take eons to get there at the speed of light. On top of that, whenever you are looking at any object in the sky, you’re always going back in time and seeing the light from an object now reaching you after making its journey from the variable source. In this article, we give the most basic answers about these units of distances!

Whenever we show an object, even if it’s a nearby object in the solar system, without fail we always get asked, “so how many light years away is this object?” While there are those who do understand the concept, most who ask actually don’t know, and are only asking because it’s a word they’ve heard countless times from various sources.

But before we dive into light years, there’s another unit of distance that beginners need to know – the Astronomical Unit!

So… What’s an Astronomical Unit?

One Astronomical Unit (AU), is the average distance in length between the Earth and Sun. It’s mainly used to measure distances within the Solar System.

In terms of length, one AU is approximately 93 million miles, or 1.5 million kilometers. Starting with Earth, here are the distances between the Sun and respective outer bodies in the Solar System.

You begin reaching into interstellar space at around 100 AU away, but the Oort Cloud, a loosely gravitationally bound region in space where comets come from, begins around 2,000 AU and extends to about 75-100,000 AU away!

Okay… Where Does This Tie Into Light Years?!

So When We’re Talking Light Years

You’re talking about anything traveling the speed of light taking the number of light units to get there. 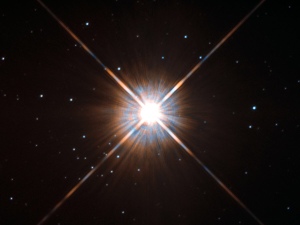 But when you’re talking stars, which are ALL light years away, now you’re talking about how many years it would take to get there at the speed of light. For example, the closest star to our solar system is Proxima Centauri, at about 4.2 light years away. If you traveled the speed of light to get to this star, it will still take you 4.2 years to get there!

The limitations of the speed of light mean every object you’re seeing is what that object looked like x amount of light units away!

Take the Sun for example. Because it’s 8 light minutes away, you are looking at the Sun as it was 8 minutes ago. If the Sun one day went black, you’d still have 8 minutes of remaining light reaching Earth before the planet gets plunged into eternal darkness.

What about stars? Going back to Proxima Centauri, you’re looking at this star system as it was 4.2 years ago. If you could hypothetically send a text message to a pen pal living in that system, your message would take 4.2 years to reach the friend, and another 4.2 years to receive the reply!

What if we received a traced signal from a civilization 100 light years away? By the time we got the signal, their civilization has either advanced further another 100 years, or could possibly be wiped out!

Now do you understand why it’s difficult for any contact with any extraterrestrial life?

Can Han Solo Make The Kessel Run in Less Than 12 Parsecs?

Star Wars lore aside, a Parsec is a unit of distance, not time!

Remember that we briefly learned about stellar parallaxes in this prior article. While stars are too far away to detect their parallaxes with your naked eye, the parallaxes of the closer stars can be measured with the right instruments using Earth’s orbit as a baseline.

Using trigonometry, the distance between the Sun and star can be found.

Astrophysicists and research Astronomers prefer to use parsecs as the unit of distance to measure distant objects. To account for larger scales, multiples of parsecs are required.

1,000 pc is equal to 1 kiloparsec (kpc). Mainly for more distant objects in our galaxy.

1000 mpc = 1 gigaparsec (Gpc) or one billion pc! This applies for more distant galaxies and known quasars!

However, light years is still used in popular science books, TV documentaries, and in the common language – hence why this site meant to help beginners get into astronomy mainly uses light years and not parsecs.

So How Do We Know These Distances?

However, once we know those distances, we can use that info on more distant stars.

The strength of a star’s light falls off with the square of a distance. You can have two stars of the same brightness, same size, and giving off the same energy; the one that is twice as far away is 1/4 times as bright as the near star. Make it 10 times farther away, it’s 1/100 times as bright.

So once you get the distance of a near star down, you just have to compare the brightness of a star further away to get that distance. However, they must be two stars of the same type, as certain types have certain properties – that’s where measuring their light spectrum comes in through spectroscopy. Then by getting it’s distance and apparent brightness, through further studies we can get its actual temperature, luminosity, mass, and its diameter!

Once all of that has been applied, you can get a true grasp of the distances between us and other celestial objects in the heavens!