Written by a Christian, for any Christian whose mission is to preach Flat Earth as fact because of what the Bible says.

For every Batman, there is a Joker. For Astronomy, there is Flat Earth. Believing the Earth is flat goes against everything that Astronomy has progressed over two millenia.

While yes, there are plenty of non-religious Flat Earthers, It just seems that the most vocal Flat Earthers are also religious, and claim to use “Flat Earth Truths” as witnessing tools. Therefore, it’s very easy for many people to dismiss Flat Earth as a religious nut-job conspiracy.

As a Christian, I believe “The Heavens declare the glory of God, and the skies proclaim the work of his hands. Day after day they pour forth speech; night after night they display knowledge” (Psalm 19:1-2).

As an astronomer, I know that what we can observe and learn from the sky helps humanity understand what we’re made of and where we come from. Studying the light of objects, going over their spectrum helps us understand their properties, their mass, luminosity, distance, plus grasping the math and physics behind it adds precision, and aids our understanding in how things actually work!

I wouldn’t bump elbows with some amazing intellectual colleagues if I didn’t have that grasp of what science actually teaches.

It’s understandable for the authors who wrote the Tanakh to describe the Earth as stationary with a sky “firmament” resembling a “stretched sheet of metal” before Classical Antiquity.

Everything we know about astronomy and the universe is the accumulation of a couple thousand years of knowledge at the most. That’s a short amount of time given how long humans have lived on this planet! Even I’ll admit, it’s hard to let all the mind blowing facts sink in, but that’s what adds to the charm of astronomy!

I’ve met Flat Earthers in person when they visit the Observatory, and I’ll get social media messages from them acting like they know more about astronomy than I do. All that happens is a game of pigeon chess – the pigeon knocks the pieces over, defecates on the board, and then struts around like they’ve won.

So yes, it gets really frustrating when it’s an obvious case of Dunning-Kruger effect at play.

For a Flat Earther who tells me I don’t read nor understand the Bible, or that I’m a shill/ part of a conspiracy movement out to deceive from the truth; I dare say that approaching someone like me with that mindset is dangerous.

Even figures such as Kent Hovind, Ray Comfort, and Ken Ham, three young earth anti-evolution creationists whom the science community often rejects, still side with “Globe Earthers” on this topic. You know Flat Earthers are in a different league when THEY say Flat Earthers are wrong.

From listening to countless debates, and having done a couple in person, I have heard all of “Flat Earth’s Greatest Hits,” featuring such gems as:

Oh dear… people really think that?! That is a very checkable statement, and chances are people saying that have NEVER looked through a telescope. Well, I have been observing stars, planets, asteroids, comets, nebulae, and even other galaxies through a telescope all my life.

I’ve observed the Rings of Saturn. I’ve seen ice caps on Mars. The two pictures above were taken with an iPhone 6 adapted onto my telescope – IT’S THAT EASY!

Jupiter’s own moons can be observed with the planet through a telescope. I myself have visually watched one of its moons move in front of the planet, and project a shadow on the disc of Jupiter… which means that Jupiter is not generating light – you cannot cast dark shadows on the surfaces of sources generating light! Reflecting light, yes, but not generating! 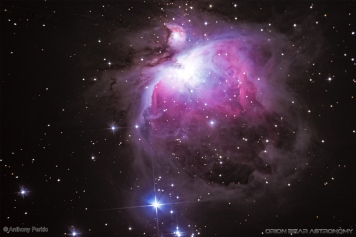 The larger the telescope and more sensitive the cameras, the more resolution and depth you can see into the universe!

So no… what you see in the sky is NOT just pretty lights in the firmament.

I have already gone into great detail about the stars being the biggest case AGAINST Flat Earth in another article, so by all means go check that one out if you want to learn more on the earth’s precession and Polaris, the celestial sphere and southern stars, and equatorial telescope mounts.

You can also check out these articles

If We’re Moving, then Why are the Stars the Same?

Why Do the Stars Change with Each Season?

So Why is Flat Earth Dangerous to Christianity?

Persisting in the Flat Earth belief goes against everything that science and astronomy has progressed and proven with repeatable evidence and predictions for the past 2,000 years. What we observe with sunrises/sunsets, the moon phases, time zones, eclipses, constellations, circumpolar stars, and how equatorial telescopes work with celestial coordinates just isn’t possible over a flat earth.

If Flat Earthers are so adept in the scientific method, then they should be able to present and prove their claims with evidence and experiments that are repeatable, peer reviewed, and be able to make predictions. It’s not my problem they get the math and physics wrong, and get hostile when told so. Just simply saying, “well NASA this, secret society that, NASA lies, black swan photo, blah blah blah” in response doesn’t automatically mean they won the debate.

Christian Flat Earthers who thump the Bible and constantly claim “astronomers are fake, astronomy isn’t a real science,  astrophotography is fake,” etc., are just making people think that Christians are stupid and/or have mental problems. To Christians, isn’t the idea of Christians looking stupid something that the great deceiver would want others to think?  Is it possible that this movement was started by con men trying to see how many Christians would fall for it?

The Bible has its share of poetic and figurative passages that Flat Earthers cite to suit their claims. Most often cited are Job 38:5, 12-14, Isaiah 11:12, 40:22, and Revelation 7:1, 20:7.  The verses which talk about “four corners/ends of the earth, circle of the earth, straight lines” do not blatantly say the earth is flat, but they are clearly misinterpreted and taken out of context.

There are no verses outright saying the Earth is flat, nor that you need to believe it is flat. But falling for false truths, false messiahs, and taking the verses out of context is definitely warned about a lot, and it’s a big trap that everyone, including Christians, should be cautious of.

Christian Flat Earthers who continue to stay on this path and lead more people into this mindset are not doing Christianity any favors. They’re not making Christianity better, they’re just making gullible people more illiterate! Going as far as teaching children and indoctrinating them into believing outlandish ideas like “Globe Earth equals 666/Satan,” will lead to more people who are intellectually crippled, and unable to contribute to centuries of progress towards STEM fields.

It can lead to a dangerous road where people dive further into conspiracies that thrive because people will just believe anything they’re told without proper research. It’s no wonder we have our share of Anti-Vaxxers and Climate Change Deniers. One well known Flat Earth YouTuber got arrested for harassing kids at a school, and what’s even more sick is that he saw nothing wrong with his actions or consequences. Lets not forget about the crazy professed Flat Earther who died after his homemade rocket crashed. Perhaps we’ll one day witness a religious cult that commits suicide over the appearance of a great comet… oh wait, that actually happened in 1997.

At the end of the day, I know that no matter what I say or what evidence I produce, I won’t convince the people who are deep into this movement. But the people who have not yet fallen into this trap are still reachable, and I would be more than happy to discuss.

If you’re a Christian who is on the fence about this, I must urge you to do better research than simply listening to some stranger on YouTube with a smartphone and internet connection. They may sound like they know what they’re talking about, but for every one video claiming indisputable proof of Flat Earth, you’ll find perhaps ten videos debunking that “proof.”

Flat Earthers are becoming way too predictable, simply reciting the same things over and over, and are running out of new things to say.

Astronomy people like me have nothing to hide. We are not hiding any secret information and we would be happy to personally demonstrate how our telescopes work, and what we can observe in the sky that proves the Earth is a spinning globe. But you have to stop hiding behind your keyboard and show an open mind to learning something!

If you made it this far, thank you for reading this article. If you have anything you’d like to say, whether you agree or disagree, I’d love to hear your feedback.

If you are going to leave a comment, please keep it relevant to the topic.